The Dragonslayers is a dragon themed event which introduces updated redesigns of existing dragon spirits which can be obtained from the upcoming Raid event, Dragons Summit. Players are also treated to additional bonuses and perks to help battle the Raid Bosses.

"A legion of dragons is laying waste to the world of Destiny of Spirits! Use the campaign's bonuses to battle these powerful dragons and take them for your own. During this campaign, we will be holding an all new event where you can face ferocious dragons in battle.

You'll be able to take advantage of all the following bonuses, so everyone from new players to old veterans will be able to challenge and collect rare dragons that only appear at certain times."

All users registered to Destiny of Spirits by July 3 (Thursday) 00:59 UTC will be given a special Super Rare spirit, Wizard. The spirit will be sent out after regular maintenance on July 3 (Thursday).

Destiny Orb packs of 100 orbs or more will now come with 20% more orbs!

During the campaign, the battle drop rate for Summoning Stones and Spirit Points will be raised to 150%. 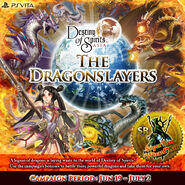 Picture of the Event "The Dragonslayers" in Asia. 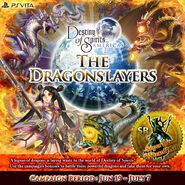 Picture of the Event "The Dragonslayers" in America. 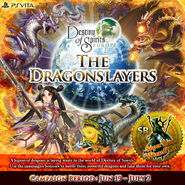 Picture of the Event "The Dragonslayers" in Europe.
Community content is available under CC-BY-SA unless otherwise noted.
Advertisement