Events are limited-time activities within Destiny of Spirits with various gifts and rewards based on your performance within the activity.

Normally used to celebrate a special occasion during the course of the game's lifetime these events usually involve giveaway spirits, discounts, additional summoning pools and other perks for players to take advantage of. 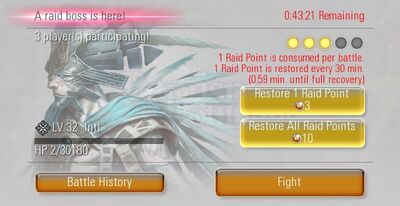 Raids are events where players get to fight against powerful boss spirits. Based on the number of conquests and conquest level players can acquire in-game points and event-exclusive spirits. Upon completing a mission on the world map the player will get a chance to encounter Raid bosses, however they won't appear after completing area boss or zone boss missions.

Players are given five Raid Points which are consumed when they challenge a Raid boss, 1 point for each attempt. The Raid Points are restored over time and also be restored by spending Destiny Orbs. The Raid boss appears only for a limited amount of time so it has to be defeated before it disappears. When entering a battle, all spirits are are fully healed and any damage received during the fight are not applied when returning to the world map and the spirits will be return to their former status prior to battling.

If the player is defeated, their friends will receive a request for help and can also join the fight against the Raid boss. When defeating a raid boss, rewards are distributed for the player finding the boss, the player dealing the most damage, and to every participant. Any contribution to a friend's Raid boss battle counts towards the number of conquests, but does not influence the conquest level.

Local Hunting, not to be confused with ordinary hunting, is an event where players have to travel to a specific location and use the Hunt feature to acquire a limited edition spirit. Players can hunt up to 3 of these spirits at the specified locations. Players will need to be aware that they may not be able to acquire these spirits again even if they are hunted in a different location.

A small event where players are tasked to acquire certain amount of battle points within a week-long period. Players who successfully complete the task are awarded a prize, usually a spirit.